The night wasn’t that bad. I think my old bones are getting used to our camping adventures.

Eat your hearts out, campers…

I set up my computer on a nearby bench while Andi unloaded his cooking set. Today was supposed to be his breakfast special: a coconut cranberry bun, a mini version of our coconut cranberry walnut bread from DrD Cookbook.

I quickly wrote a summary of the day with feet still hugged by morning dew. The bun took 20 min to “bake” and the whole campground could smell it. Hehehe… eat your heart out!

The Tree Museum, not for anemic

Our morning plans were all about nature. The Tree Museum sounded attractive. I imagined different types of trees and stumps hidden in the bushes waiting to be discovered by a passer-by.

But the reality wasn’t that at all! If you are athletic you can try the museum as a challenge, but if you have some trouble running, swatting, or have anemia don’t attempt.

The amount of flying vampires was so enormous that we made 2 km trail in something like 5 min. Not much time to stop and enjoy exhibits, which were…. quite surprising.

From Hwy 6 we drove to Eagle Lake. Andi does not look that old (thanks to a combined effort of DrD and Uthing), but he admitted he built a cottage there some 26 years ago.

Sir Sam`s Inn was kind enough to give us a canoe so we could make it to the island. Only after a few paddle strokes I realized that Frisbee is a good upper body exercise. My shoulder muscles reminded me about that every time I rowed. I felt the DOMS (delayed onset muscle soreness).

Despite some initial difficulties we found this 26-year old carpentry gem and even the same, but a bit older, owner in it. We had a great chat and lots to talk about for the rest of the evening.

Time to get tipsy

Going back was a little bit difficult due to lack of GPS or G3 signal, but somehow we made it onto Hwy 118E. We were looking for a coffee place, but instead we ended up in a Wine & Gift shop somewhere close to Haliburton.

After generous sampling we got persuaded to buy five bottles of the intoxicant: one rhubarb, three currant-raspberry, and one maple. The wines were not organic, but so aromatic that we have temporarily changed our buying standards.

GO TO KILLBEAR PLUS – PART 1

GO TO KILLBEAR PLUS – PART 5 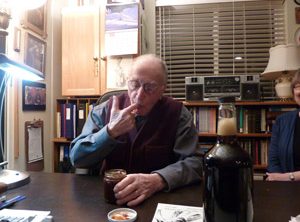 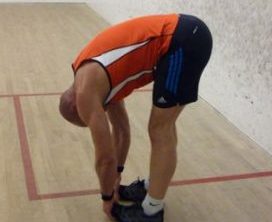 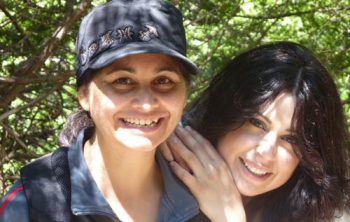