We for sure didn’t suffer a hangover from last night, but waking up before sunrise wasn’t easy. We made our standard tackle-a-busy-day bacon and egg breakfast in the bathroom and never-to-forget a shot of espresso in a cute Italian mini espresso maker.

The sun was coming out slowly, as if embarrassed, as we continued packing up our belongings back into our luggage bags. We were swift. It was barely bright when we checked out of the hotel.

Off to Johnson Canyon

Johnson Canyon was first on our list. Apparently sufficiently attractive to make us walk an hour uphill in the middle of winter. Both dressed in snowmobile suits, we were very ready, but our Samsung Tablet wasn’t. Its GPS was misbehaving.

We learnt quickly that there were several Johnson places. All lined up along Bow Valley Parkway within a few tens of kilometers from each other, but none of them was Johnson Canyon.

Lake instead of Canyon

Johnson Lake sounded like a tourist attraction, so we decided to go there. We figured Johnson Lake and Johnson Canyon may be located close together and we were counting on the presence of road signs around.

Following the GPS advice we got off Bow Valley Parkway. It wasn’t even 400 meters away from the highway when Andi got excited.

My head was buried in GPS maps and making sure that we wouldn’t get lost. There weren’t many cars on the road and the side streets looked very “natural”, snow covered and slippery that is. Yet Andi’s verbal ruckus got my attention. What!

My head quickly turned to the right never to turn back again. My eyes got glued to four magnificent creatures grazing some thirty meters away from us.

We parked our car on the side of the road and watched in amazement as Elks, gentle giants were digging their hoof’s to clear the snow for some dry grass remnants. The giants did not care. They did not even look up. They saw cars like ours before. We weren’t even an attention worthy distraction.

We stood there for fifteen minutes while the mini herd was busy grazing. This was a good start of the day and even worth getting lost. We got into the car and continued towards Johnson Lake coordinates. Little did we know at that time that elks would be our major attraction for that morning and there would be few more close encounters in the next hour or so.

In fact a few minutes later there were three elks grazing about 10 meters from the road. We made a lot of commotion inside the car while slowing down to take some pictures. Again, none of the giants even looked up. Three minutes later two other elks were grazing on a steep slope less than 6 meters away from the road. Just awesome!

To cold for a swim

The road leading to Johnson Lake was car-free and winter beautiful. After 20 minutes of defensive snow driving we saw a sign announcing arrival at our destination. It was Johnson Lake and had nothing to do with the intended Johnson Canyon.

There wasn’t anybody around. It wasn’t a major tourist attraction. The frozen lake was full of animal prints but no sign of the actual animals. It was too cold to follow the tracks, so we went back to the car and drove to the next Johnson place which was a few kilometers north of this one.

I quickly passed the camera to Andi hoping to document that special moment. But he got so mixed up with excitement that accidentally pressed the video button twice stopping rather than starting recording. D’uh! No elk crossing video for us, but it did get to the other side! 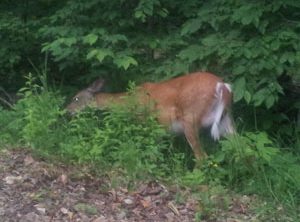 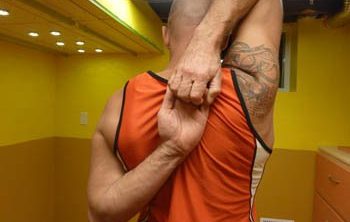 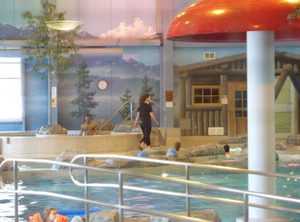