When I was confronted with the idea of solar installation on our step van I naively thought that all it takes is a random solar panel and a random wire. Little did I know that my over-simplified view was a source of deep anguish for my husband who tired very hard to explain that the solar installation will take more than my imaginary day. It took hours of vocabulary-expanding discussions, weeks of explanatory youtube clips, more than two dozen calls to solar-related companies, and a litany of emails to van buddies who had some kind of experience in the area, before I let go of one panel one wire idea.

The steep curve we both went through was enlightening. It turned out that, just like it is with doctors and nutritionists, solar installers offer many contradicting opinions and confusing viewpoints. We did not want to waste a pile of money on the wrong equipment, so we took our time and sift through all the data, the emails, the charts, technical points, expert opinions, and sales pitches.

Finally, we decided on the setup that supported our specific van living needs. The solar experience totalled about $5,000. It was made up of six 100W tilting roof panels that converted solar rays into usable energy, one high-end charge controller that set the system parameters, one 1000W inverter-charger that distributed energy to our high-demanding appliances, one 500W inverter for low-demanding appliances, and four robust deep cycle batteries that safely stored captured energy.

Step van gets solar in stages

The solar installation on the step van took about two months and had several phases. The first two weeks took place at the crowded RTR gathering where Andi mounted one roof rack. Then there was a week on the Arizona desert where he fit a cat walk in between the panels, and eventually a month and a half while we dry-parked on William’s yard. This is where the bulk of the work and all the wiring took place. The work space may have not been perfect, but our timing was. We finished all the work just before having to head back to Canada. Yey! 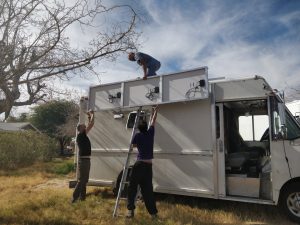 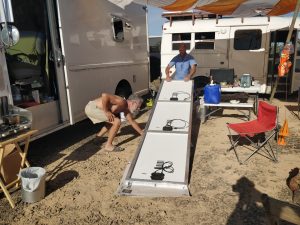 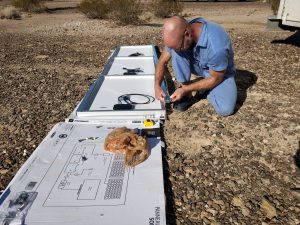 We need to make a mention of two people who we met on the road, but who enabled our solar progress. We are immensely grateful for the intellectual input of the Tea Man who guided us during the difficult wiring decision times as well as generosity of William, who shared his California home and yard with us. Without them the progress wouldn’t be possible and we would have turned grey from stress.

Thankfully to them and a few other people, our step van is ready for an off-grid experience. Our design is capable of generating 500 watts an hour which is sufficient for powering lights, fridge/freezer, working computers and phones, as well as charging shavers, toothbrushes and other grooming equipment. It is also more than adequate for charging power tools, fans, a tiny vacuum, and future electric bicycle. Our ability to capture solar is not without consequences and it translates to a large degree of freedom, ability to visit remote places while maintaining civilized level of hygiene as well as maintaining continuity of work.

After a few months of testing we can safely announce that our solar setup has been working flawlessly, which is not the case for many van-lifers and off-griders. Many solar setups fail due to incompatibility of the parts, improper wire sizes, and poor quality of components. Fails are not only dangerous presenting with electrical, fire, and chemical hazards, but also quite expensive. Solar wires alone can run into hundreds of dollars, never mind the cost of replacing dead batteries.

If you ever want to copy solar logic you are welcome to get the parts we used in our LUVe. This particular set up worked for us and may work for you as well. For actual parts we used in building our step van look up our Amazon’s LUVe list. 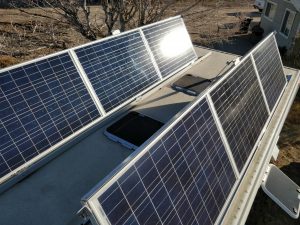 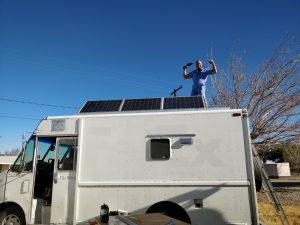 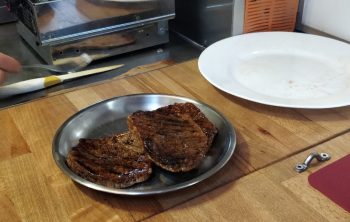 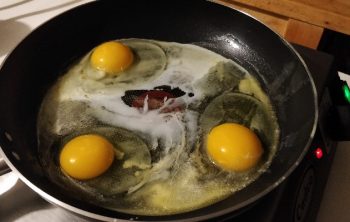 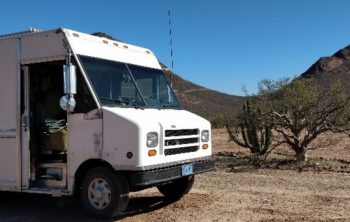