The first task was to cross the border. Given the recent US border crossing and immigration hullabaloo we were not sure what to expect. Motivated by the cruel Canadian winter and an upcoming nasty storm, we decided to give it our best try.

We arrived at the border and drove along the designated RV lane, although we were not sure if we were all that right. Our LUVe still looked like an old (or I should say more like well worn) FedEx delivery vehicle from the outside, falling short of resembling a recreational vehicle.

The border officer looked up at the vehicle and asked if it is a commercial vehicle. We choired “no”. He raised his eyebrows and said he needs to get inside. Our hearts jump to our throats. For a moment we thought that’s the end of our journey as he could deem our LUVe non-compliant or who knows what. 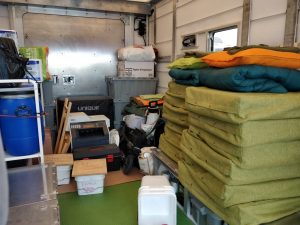 So, he got in, looked around and asked “Did you put this in yourself? What is this? What’s behind there?” etc. He started walking around touching the ceiling, the wall frame, the heater box, etc. Within a few seconds his stoic face turned into glee. It was obvious that he liked what he was seeing. Maybe he was into cars, maybe he was into metal works, maybe he even had an old step van he wanted to remodel himself. Anyhow, he let us through, but before he exited our LUVe he changed his face back to professionally stoic, so that nobody questions his fun moments on the job.

Our second task was to avoid that nasty cold front that was approaching from behind.  Initially we were planning to rest south of Buffalo, NY, but after hearing that a few feet of snow is likely overnight we were motivated to add two extra hours behind the wheel. However, before we headed south we had to secure an internet connection. 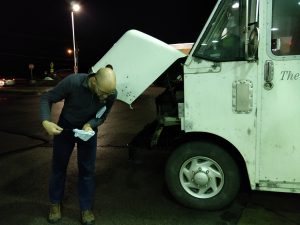 Our research indicated that Cricket was the place to go. A $60/month plan that was most useful for us. We pulled up to a 4.3-rated Cricket outlet on Pine Ave. to get e-connection. It wasn’t in the best part of town, but despite that our experience was excellent and the service was outstanding.

Shortly after our phone got a new SIM card we rushed back on the road. It was past 4pm and getting dark. The snow-heavy clouds were getting meaner and the forecast wasn’t improving. We kept on driving, because we did not want to risk getting stuck in a pile of snow without any means of getting out. LUVe did not have electricity, water, heat or even a sufficiently large snow shovel.

We drove past the sunset into cold December darkness. The eyes were getting tired and we needed to stop. Walmart in Edinboro, PA apparently allowed overnight stays. We decided to give it a try. It was after 8pm when we pulled into the parking lot. The sky was pitch black. The wind was howling. Temperature was dropping. Since we did not have lights, water, cooking facilities, or heat all there was for us to do was sleep. 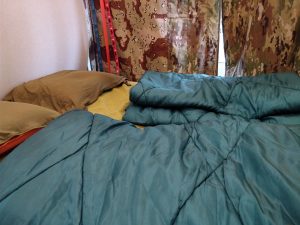 We pulled out a blanket and two sleeping bags each. There were no pyjamas or anything like that. It was too cold to undress. The penetrating late December freeze was coming from every wall and every corner of the van. We put the hats on and slipped under the covers.

The night wasn’t the greatest. We never slept in a parking lot before, so the experience was awkward and besides we were not sure if we would not be asked to leave. The cold was getting worse with every minute. My cheek bones started to hurt from frigid temperatures. The tip of my nose was so ice-cold that I could not fall asleep. I formed a breathing tunnel with my covers. This was the only way I could stay semi-comfortable.

At 4am we could not take it any more. The forecast was mean. It was about to dump a few feet of snow in Pennsylvania within an hour or so. No, thank you. We already left that behind in Canada.

We got up and headed South for a promise of warmer temps. 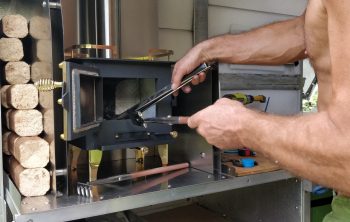 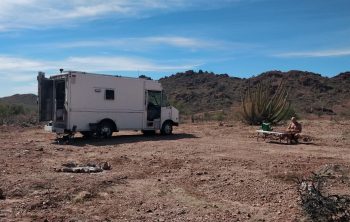 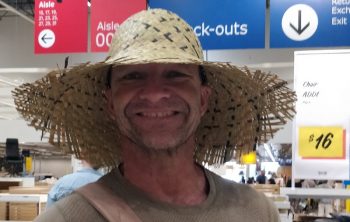